What Type of Corporation Should You Form?

Disposing of one question immediately; it makes no sense to form a corporation or an LLC outside of California if your principle place of business will be in California.  A “foreign corporation” must register with California and still pay the $800 annual minimum tax if it has a place of business in California.
The title Limited Liability Company, LLC, causes confusion in the minds of many SCORE clients.  Both the S-Corporation and the LLC enjoy limited legal liability (like all corporations) under both California and Federal Law.  When seeking to form a business entity that provides limited liability to its owners (shareholders), important questions arise at both the Federal and the California State level.  For most SCORE clients, the S-corporation pays significantly lower taxes than the LLC.

California recognizes both the C—and the S-- types of corporations.  A California C—corporation files a Form 100 tax form annually.  This form is very similar to the Federal Form 1120.  A California S—corporation files Form 100S annually.  This form is very similar to the Federal Form 1120S.  Both the C—and S—corporations are taxed on their net profit after deducting their business expenses (including Section 179 capital investments and other tax advantages).  The S—corp. tax rate is lower than the C—corp. tax rate, it is 1.5% of the net profit with a minimum annual fee of $800.  The profits of an S—corp. are distributed to the shareholders acting as partners where the profits are shown as non-employee income on their personal FTB Form 540.  No employment taxes are due on this form of income.

California also recognizes a separate entity known as a “Limited Liability Company,” the LLC.  The LLC is provided the same limited liability as enjoyed by corporations.  However, the LLC is taxed differently using California Form 568.  The LLC pays a “fee” based on its total California income (before deducting any expenses or Section 179 capital purchases) and also the $800 annual tax.  The sum of the fee and the tax is generally higher than the tax that would be paid on a California S—corporation.  See the attached graph.

A California LLC can avoid the higher taxes required by Form 568 if it is classified as an S—corporation for tax purposes.  It does this by filing the same Form 2553 described above with the Federal Government.  This form can only be filed if the LLC conforms to the Federal limitations on an S—corporation (thereby eliminating any advantage in forming an LLC in the first place).

The only time the LLC is taxed favorably compared to an S-corporation (with less than 20% net profit) is when it total revenue exceeds two to ten million dollars depending on the net profit of the S—corporation.

Clients should be made aware of these differences.  In most cases, they should be discouraged from creating an LLC unless it is necessary that a non-resident alien be a shareholder.  Otherwise, they should consider an S-Corporation since it achieves their desired goal of limited legal liability and will generally pay lower taxes.  In any case, they should be encouraged to engage a tax professional to advise them on their best course of action. 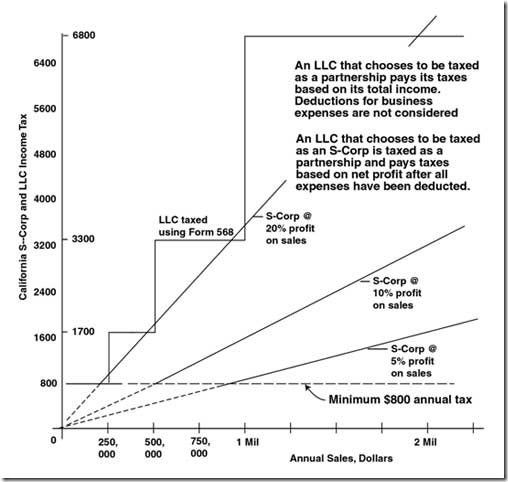