Mentors are great, but an increasing number of executives are finding that sponsors are the ones who really send you to the top.

This article was written by Jennifer Alsever, in FORTUNE Magazine, May 2012 edition. Reprinted by permission

Barbara Adachi was always a hard worker. But even after 11 years running the San Francisco human capital division for Deloitte Consulting, when it came to a key promotion she had something many senior executives lacked: an influential backer who believed in her.

Mike Fucci, a partner running the company's Eastern practice, had reviewed her candidacy for partner six years earlier. When he lobbied for her promotion into a new major role, she didn't feel ready, but Fucci convinced Adachi that he would teach her what she needed to know to be successful. Ten years later she now runs Deloitte's national human capital practice and has a coveted seat on the company's senior leadership team. "By giving me that chance and recommending me for that role, he put his reputation on the line," Adachi says. "We still are hand in glove, and I know he's got my back. He knows I'm 100% loyal to him."

In today's career maneuvering, having a mentor is nice. But having a sponsor is what will get you to the top. What's the difference? A mentor can coach you, give advice, and help prepare you for your next position. A sponsor will go out on a limb for you, open the door to your next job, introduce you to the right people, and make the case for you in those top-level conversations that could make or break your career. "A mentor will talk with you, but a sponsor will talk about you," says Heather Foust-Cummings, senior director of research at Catalyst, which has conducted research on sponsorships.

The idea of sponsorship has gained momentum lately as companies aim to move more women into corporate leadership. A 2010 Harvard Business Review study of 4,000 high-level employees reported that 19% of men say they have a sponsor, compared with 13% of women. Yet women who have a sponsor in their corner are far more willing to negotiate raises and more likely to see more promotions, higher salaries, and more career satisfaction -- and get to the top. "Sponsorship is the only way to get those top appointments," says Sylvia Ann Hewlett, president of the Center for Talent Innovation and co-author of the Harvard Business Review study.

Sponsorship is gaining ground across the board. Research shows that the vast majority of both men and women feel more satisfied with their rate of advancement when they have sponsors. 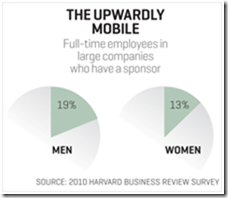 These relationships often can't be scripted. And protégés do not usually do the picking. Ramona Cappello, CEO of Corazonas Foods in Los Angeles, says her early career was shepherded by a well-placed executive at Nestlé. When he learned she'd been accepted to Harvard Business School, he told her to delay it for a year and promised that she would get a great education by staying with the company. She did so and rose to become assistant general manager at Nestlé in the mid-1990s, then VP at Celestial Seasonings, and an executive vice president at Kendall-Jackson. Her sponsor, Timm Crull, became CEO of Nestlé USA. "I was found," she says, "and he made sure I had all the right roles."

Are you a potential protégé?

Performance counts. Great work is a must, and before anyone can take a chance on you, they must see that you're loyal, trustworthy, and dependable. These executives are betting their own reputations on your career, says Heather Foust-Cummings, a senior director of research at Catalyst, a nonprofit dedicated to expanding women's career opportunities. "You don't take a donkey to the Kentucky Derby," she says. "No one will take the risk on you."

Find your star power. Don't assume that putting your head down and doing your work will get you noticed. You need to become a known entity, says Foust-Cummings. Volunteer for bigger assignments, attend conferences, and become active in your industry.

Don't force it. Most relationships evolve naturally and won't happen if you flat out ask someone to be your sponsor. Hedge your bets against your sponsor leaving the company by nurturing relationships with multiple people, says Sylvia Ann Hewlett, president of the Center for Talent Innovation.

Be confident. If you're worried you're not qualified for that major assignment or concerned about your 2-year-old at home, do not share your honest ambivalence with a sponsor. "Show you're hungry for an opportunity," says Hewlett. When you get feedback, handle it with a thick skin and be prepared to act on advice given.

Return the favor. Unlike a mentor, a sponsor will expect your loyal support in return. A sponsor benefits, too, from the "power of the posse" to build his or her own career. After all, no one gets to the top alone.

Posted by SCORE Orange County at 8:56 AM