Let Your Imagination Fuel Your Success 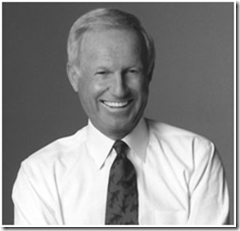 This article was written by Harvey McKay, author and lecturer

Take a close look at the back of a dollar bill. On the left side is a pyramid, with an eye at the top. Over the pyramid is the Latin inscription “annuit coeptis.” It means: “Providence has Favored Our Undertakings.”

The pyramid symbolizes the strength of the union of the states. The top of the pyramid is unfinished, meaning there is still work to be done to make our system even better. The eye stands for the all-seeing God, Supreme Builder of the Universe. Benjamin Franklin chose this motto because he believed imagination was the singular characteristic of the people he helped to forge into a new nation.

I think Ben Franklin would be pleasantly surprised where imagination got this great nation.

I’m always fascinated listening to people who see the world through a different lens. Most of us have ideas of what we’d like to change, but not necessarily the vision to make it happen. People who can clear the negative clutter from problems will always be successful.

The famous inventor Thomas Edison used to say his deafness was his greatest blessing. A blessing because it saved him from having to listen to reasons why things couldn’t be done.

Curtis Carlson, founder of the Carlson Companies and one of my mentors, spent his life building and expanding. When asked what personal qualities contributed to the building of his successful empire, Curt responded, “I think my success is the result of my ability to see and to imagine how things can be. I’m not distracted by how things are.”

It’s never too late to develop your imagination, although I believe that the longer you suppress it, the more challenging it will be. Consider this lesson that was shared by Gordon McKenzie, a well-known creative force at Hallmark Cards.

McKenzie often visited schools to talk about his work. He usually introduced himself as an artist, and then would ask the students, “How many of you are artists?”

In kindergarten and first grade, almost every hand was enthusiastically raised. In second grade classrooms, about three-fourths of the children would raise their hands, but not as eagerly. Just a few third-graders admitted their artistic talent.

By the time he interviewed the sixth graders, he said not one of them raised a hand. They thought being an artist was “uncool.” (My guess is that Curt Carlson was one of those kids who didn’t mind being “uncool.”)

So if we want to cultivate creativity and imagination, a good place to start is with children. Children don’t recognize limits on possibilities. They look through that different lens, that is, until we train them to focus on the practical.

Children are open to trying all kinds of solutions. We would do well to learn from them that there is rarely just one way to get a job done.

A friend shared a story from the NewsOK website about two parents working on their Christmas cards with their 6-year-old son. The son’s job was to lick the stamps (back before self-adhesive stamps were available.) But the little boy balked because he didn’t like the taste of the glue on the stamps. His parents prevailed, and reluctantly, he went to his room to finish his assignment.

Before long, he emerged from his room with a big smile on his face and handed his father the pile. Every envelope was stamped. His stunned father said, “But I thought you didn’t like the way the stamps tasted when you licked them!”

“Yeah, that was yucky,” the son replied. “So I just licked the envelopes and then stuck the stamps on.”

Of course, I love a good story about envelopes!

From Napoleon Hill’s famous book Law of Success, comes this summarizing thought: “Just as the oak tree develops from the germ that lies in the acorn, and the bird develops from the germ that lies asleep in the egg, so will your material achievements grow out of the organized plans that you create in your imagination. First comes the thought; then organization of that thought into ideas and plans; then transformation of those plans into reality. The beginning, as you will observe, is in your imagination.”

Posted by SCORE Orange County at 9:24 AM