Take Pride in Your Work, Not Yourself 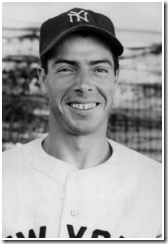 July 25, 2013, By Harvey Mackay, from his blog, reprinted by permission

Joe DiMaggio of the New York Yankees had a fierce pride about always doing his best.

The Yankees were on the road for a doubleheader against the St. Louis Browns.  The day was not only boiling hot, the Browns were last place in the league.  Despite this, DiMaggio made an off-hand comment that he was looking forward to playing that day.

“In this heat!” said an amazed sportswriter.  “How can you enjoy playing a doubleheader in stifling weather like this?”

Glancing toward the grandstand, DiMaggio said, “Maybe somebody out there has never seen me play before.”

DiMaggio, affectionately known as the Yankee Clipper, was a prideful player.  He was serious and genuine when he made those comments.  Unfortunately I know many people mistake pride for selfishness.  When I looked up pride in a thesaurus, I was shocked at the suggestions – arrogance, conceit, smugness, self-importance, egotism, vanity, immodesty, superiority and on and on.

Maybe there isn’t a good synonym.  But pride to me is being self-confident, but not egotistical.  Pride is having a positive, can-do attitude because you will settle for nothing less than your level best.

I want people like Joe DiMaggio who are proud of the work they perform.  Here are ways to build the pride that I look for:

As a professional photographer, Julie took a lot of pride in her work, and brought samples everywhere she went in hopes of getting new business.  One evening she was at a dinner party, and her host asked to see her portfolio.  She showed him over a dozen pictures, and the host was impressed.

“These are some really nice shots,” he told her.  “You must have a great camera.”

Julie was annoyed at the suggestion that it was her camera – not her talent – that allowed her to take great pictures.  But she said nothing until the meal was over.

“Thank you,” said the host, pleased.  “I prepared it myself.” “That dinner was excellent,” she said.

Julie smiled.  “You must have some great pots and pans.”

Posted by SCORE Orange County at 9:41 AM