Studies Show That A High Percentage Of Start-Ups Fail. Here’s Why. 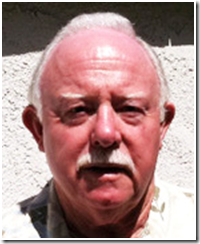 An interesting article appeared in the on-line version of the Wall Street Journal several years ago entitled “The Venture Capital Secret: 3 Out of 4 Start-Ups Fail” written by Deborah Gage (see: www.WSJ.com, dated September 20, 2012) in which she cited some interesting statistics from a research study conducted by Shikhar Ghosh, a senior lecturer at Harvard Business School. Mr. Ghosh examined data from more than 2,000 companies that received venture funding, generally at least $1 million, over the time period 2004 through 2010. He pointed out in his research that one needs to be careful how they define “failure” as there are different possible definitions of failure. If failure means liquidating all assets, with investors losing all their money, an estimated 30% to 40% of high potential U.S. start-ups fail, he says. If failure is defined as failing to see the projected return on investment such as a specific revenue growth rate or date to break even on cash flow, then more than 95% of start-ups fail.

Also, in her article Ms. Gage makes mention of several other studies of interest in this context of “start-up failure”. For example, of all companies, about 60% of start-ups survive to age three and roughly 35% survive to age 10, according to separate studies by the U. S. Bureau of Labor Statistics and the Ewing Marion Kaufman Foundation, a non-profit that promotes U.S. entrepreneurship. It was also pointed out that companies that didn’t survive might have closed their doors for reasons other than failure such as being acquired or the founders chose to move on to other ventures.

So, what’s going on here? To get some insight into the possible answers to this question, there have been several “post-mortem” type surveys and studies that might shed some light as to what happened and why.

First, a survey was conducted of founders involved in 32 start-up failures to summarize the common reasons start-ups fail and these results were published on January 11, 2011 at a blog site—specifically http://www.chubbybrain.com/blog. The results are shown below relative to the top 20 reasons these start-ups surveyed failed. 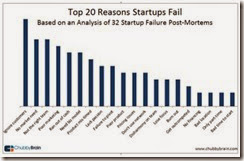 Referring to the chart above, the top 10 reasons can be summarized as follows:

2. No market need—Building a solution looking for a problem, i.e., not targeting a market need.

3. Not the right team—Not the right mix of skill sets and inadequate checks and balances amongst the founding team members.

4. Poor marketing—Not knowing the target audience and not knowing how to get their attention and convert them to leads and ultimately customers.

5. Ran out of cash—Money and time are finite and need to be allocated judiciously, i.e., not adequately addressing the question of how one should spend their money.

6. Needed a business model—Lack of a well-defined business model that could be implemented. (Note: Here is one of the major strengths of the SCORE team.)

7. Product mis-timed—Need to understand the “window(s) of opportunity” and release the product and/or service accordingly.

8. Lacked passion—Lack of passion and genuine interest in the entrepreneurial pursuit.

Second, another survey worth noting (and comparing with the above-cited results) was reported in an article entitled “Why startups fail, according to their founders” by Erin Smith on September 25, 2014 (see: http://fortune.com/2014/09/25) in which reference was made to an analysis conducted by CB Insights (a New York-based venture capital database company) of 101 post-mortem essays by start-up founders to pinpoint the reasons they believe that their company failed. These results are shown in the chart below. 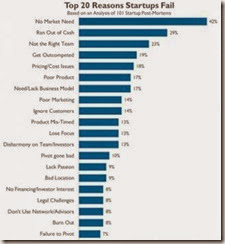 Referring to the chart above, the top 10 reasons can be summarized as follows:

What is really interesting is to compare the results of these two surveys, conducted approximately three years apart and with different samples, from the perspective of the top 10 reasons for start-up failures. In each survey, 8 out of 10 reasons were common, namely: ignoring customers, no market need, not the right team, poor marketing, ran out of cash, needed a business model, product or service mis-timed, and poor product or service. These are the “RED FLAGS” that need to be considered in planning your new business start-up.

Finally, some interesting observations are provided by Scott Shane in his September 26, 2011 article entitled “Why Do Most Start Ups Fail” (see In Startup Magazine) in which he states that “Not enough entrepreneurs have experience in the industries in which they are starting their businesses—specifically, a sizeable fraction of entrepreneurs start businesses in industries in which they have no work experience.” Consistent with the common results from the two surveys cited above, he states that “Many entrepreneurs fail to take the actions that research shows help businesses survive. Academic evidence shows that putting in place careful financial controls, emphasizing marketing plans and writing a business plan increase the odds that a new business will survive, yet many founders fail to write plans, have inadequate financial controls and don’t focus on their marketing plans.”

SCORE counselors and mentors have the responsibility to provide guidance and counseling to start-up entrepreneurs to increase the likelihood of their success, but, as pointed out by Scott Shane in his article, it is “true some start-ups fail because of factors beyond their founder’s control, but responsibility for much of the high failure rate of new businesses lies with the entrepreneurs themselves.”

Posted by SCORE Orange County at 10:15 AM